Field Lacrosse is a fast, high paced, action filled sport featuring two teams with 10 runners per a side. The positions of those runners are one goalie, three defenders, three midfielders and three attack. The object of field lacrosse is to score more goals than the opposing team in 4, 15 minute quarters, 60 minutes total. Field lacrosse differs from box lacrosse by being played outdoors on a football field sized surface (110 Yards x 60 Yards). The larger playing surface and variety of position makes this sport appealing to all types of athletes.

Face-off X: The name for the centre of the field where the faceoff takes place at the start of each quarter and after every goal.

The "X": The OFFENSIVE area behind the goal in which the attack sets up to run plays through and around to create opportunities or hold possession at certain moments.

Restraining Line: The lines on either side of half which the defenders, goalies, and attackman must wait prior to a faceoff. The restraining lines also signifies the defensive and offensive zones (see Stall Warning).

Wing Lines: The lines on either side of the face-off X where the teams midfielders line up prior to a face-off. These players are released upon the whistle to signal the face-off.

Goal Crease: A 9 foot (in diameter) circle surrounding the goal net in which the offense is NOT allowed to step in. A player may direct a ball out of the crease or into the goal if it is deemed "loose". A goalie may only hold onto the ball for 5 seconds in this area before having to vacate.

Goal Line Extended (GLE): A term used when describing an imaginary line extending from the goal line to each sideline. GLE is used as a reference to setup up plays both offensive and defensive in order to determine minimum allowable shooting angle or help with clears. 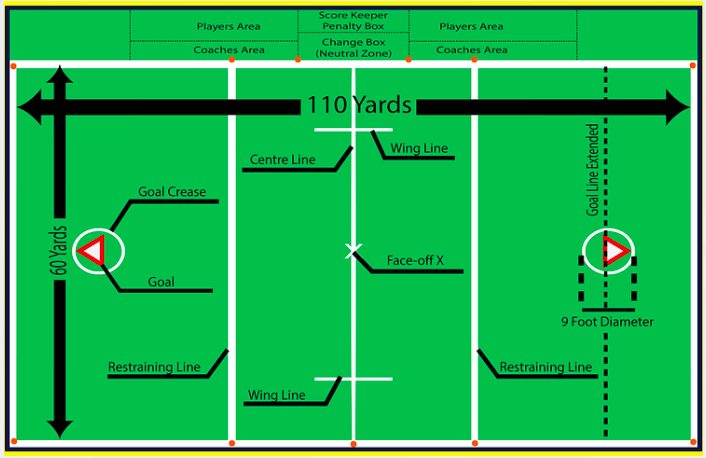 Goalie: Much like other sports with goaltenders, in field lacrosse the goalies responsibility is to prevent the ball from entering his or her goal. The goalie is also tasked with communicating to the defense the location of the ball and any adjustments that are required by the defense.

Long Stick Defender: A defensive player who plays with a 6 foot tall stick. The extra length allows the defender to stick check from further distance. The long stick defender or close D is responsible for defending the opposing teams attack. They generally stick on the defensive side of the field.

Long Stick Midfielder (LSM): A team is allowed 4 long stick defenders on the field at a time. The LSM is a long stick who plays the midfield role when in a defensive position.

Attack: The attackmen are the offensive specialists on a lacrosse team. In this position a player is  tasked with playing against the defending teams long stick defenders and scoring goals with the help of their midfielders.

Drawmen (Face-off): The position in which a midfielder (usually) takes the draw against the other teams drawmen. The two battle it out for the ball, attempting to win possession to their wingmen (two other midfielders) or to themselves. In men's lacrosse, the face-off is signaled by a "down" call in which the players take a crouched position with the back of their stick facing the grounded ball. The "down" call is followed by a "set" call in which the referee determines that both players are no longer moving into position, followed lastly by the whistle signifying the beginning of the face-off.

Man Down: The term used to signify a penalty kill or the situation in which a team has taken a penalty and must play with one less player.

Man Up: The term used to signify a power play or the situation in which the opposing team has taken a penalty and your team is now up one player. 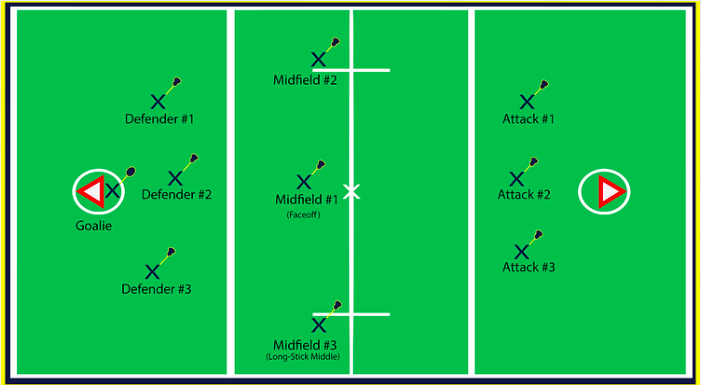 Back Up: In Field Lacrosse, when a shot is taken by either team, the team closest to the ball when it goes out of bounds is awarded possession. Back up is the term used when the offensive team is shooting and the ball has missed the goal. The "backer" is the person responsible for maintaining possession.

Clear: When the goalies makes a save or the defending team has passed the ball back to the goalie, the goalies will say "break" in order to signal their team to disengage from defense and find space/change.

Fast Break: The term used when a transitioning team enters the offensive team zone with an odd-man situation. The offending team has the advantage with more players and will look to attack goal quickly before the defending team may recover.

Slow Break: The term used when a team is transitioning up field with no odd-man advantage. A slow break generally goes through "X" with the attack taking control of the ball.

Back to Hole: Communicated by the defense when the offending team has gained an advantage or fast break. When back to hole is called each member (usually midfielders) will run back to the front of the net and once settled will D-up their opponent.

Face Dodge: A dodge, in which the offending player fakes with either his or her head and or body before switching direction to try and make the defender off balanced.

Split Dodge: A dodge, in which the offending player fakes before switching hands and heading in the opposite direction of their fake. Generally the split dodge used to beat a defender wide and free up their hands for a shot.

Roll Dodge: A dodge, in which the offending player plants his/her foot in front of their defender before switching hands and turning their backside to their opponent. It is important to maintain stick protection during this transition.

Slide: The defending team calls "slide" when sending an additional player to help defend the incoming ball carrier. The slide call involves they entire defense to shift in order to cover the opposing teams players.

Help Left/Right: A defensive term used when the defender perpendicular to the ball carrier is sagging in to support his or her teammate d-ing up the opposing ball carrier.

Pick: Where player takes a stationary position in order to block an opponent in order to free a teammate for a pass or shot.